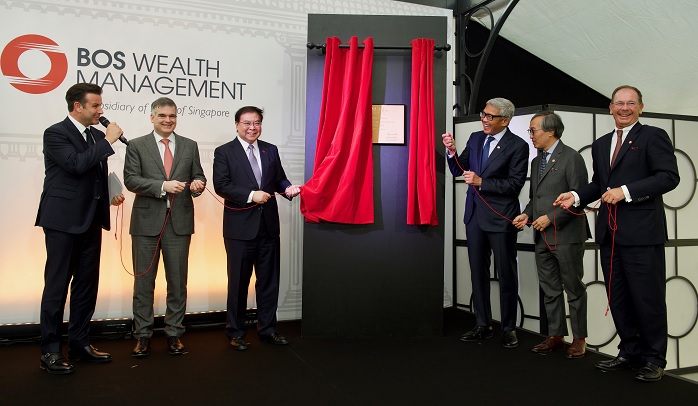 This ushers in a new growth phase to its presence in Europe which has the largest population of ultra-high net worth individuals in 2018 worldwide - 35% of the global population - with an expected increase of 24% over the next five years.1

Heading the Luxembourg-headquartered subsidiary is Chief Executive Officer Mr Anthony Adriano Simcic. Ms Liz Bottomley is the General Manager of the UK branch of BOSWM, based in London, reporting to Mr Simcic.

BOSWM presently has 30 employees across its Luxembourg and London offices and plans to continue hiring strategically.

On 1 April 2019, BOSWM held the official opening of the business in Luxembourg, officiated by the Finance Minister of Luxembourg Mr Pierre Gramegna. Singapore’s High Commissioner to the UK Ms Foo Chi Hsia graced the opening of BOSWM’s UK branch in London on 2 April 2019.

Commenting on the official launch of BOSWM, Bank of Singapore Chief Executive Officer, Mr Bahren Shaari, said, “This is an important milestone for Bank of Singapore. Europe has always been an integral part of our business. The setting up of BOS Wealth Management Europe in two leading financial hubs further deepens our commitment to serving the ultra-high and high net worth individuals in this region.”

Luxembourg’s Minister of Finance, Mr. Pierre Gramegna, said, “The launch of BOS Wealth Management Europe is an important occasion. It is the first Singapore financial institution to establish a presence in Luxembourg. The fact that Bank of Singapore has chosen to set up its European hub in the Grand Duchy confirms Luxembourg’s role as one of Europe’s leading wealth and asset management centres.”

Prior to the set-up of BOSWM, Bank of Singapore had been serving its European clients from its Singapore headquarters and through its parent company OCBC Bank’s London office.

Mr Simcic was appointed Chief Executive Officer on 12 March 2018. A French-Italian, he has 20 years of banking and asset management experience.

As CEO, he is responsible for the overall strategy, governance, commercial development and implementation of BOSWM’s activities in the European Economic Area and the United Kingdom.

Prior to joining BOSWM, Mr Simcic was the Managing Director of HSBC Private Bank in Luxembourg.

Reporting directly to Bank of Singapore’s Global Market Head for Singapore, Malaysia and International Mr Olivier Denis, Mr Simcic holds a Master’s Degree in European Studies from the London School of Economics and Political Science as well as a Bachelor’s Degree (Hon) in Economics from the University of Warwick.

Ms Bottomley was appointed General Manager of BOS Wealth Management Europe S.A. – UK Branch on 2 January 2019, having joined the London branch of OCBC Bank in November 2018. An industry veteran, Ms Bottomley has been advising private clients for over 25 years in Europe and Asia.

As the General Manager of the UK branch, she is responsible for growing the business for BOSWM in the UK. Ms Liz reports to the Chief Executive Officer of BOS Wealth Management Europe S.A. Mr Anthony Simcic.

Ms Bottomley was previously the Head of Private Banking at Arbuthnot Latham, a boutique private bank in London and a Client Partner with Coutts’s International Private Banking Division.

1According to Knight Frank’s 2019 Wealth Report