Global financial markets are at important crossroads in the second half of 2020 as clarity on the shape of economic recovery from COVID-19 and policy stimulus begin to emerge. Managing volatility will be key to navigating the landscape ahead as rates fall to ultra-low levels and the pace of recovery becomes more uneven.

Bank of Singapore’s newest talk show “The New Normal”, features Bahren Shaari, CEO of Bank of Singapore, and Larry Fink, Chairman and CEO of BlackRock in a dynamic discussion on the big ideas, trends and challenges shaping our environment today. Read key takeaways from this exclusive conversation here.

If you would like to watch The New Normal webinar playback and attend future events, please register your interest and our team will contact you.

Watch highlights of the event

An exclusive conversation with
Larry Fink and Bahren Shaari 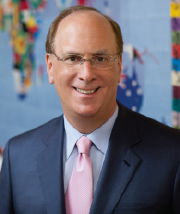 Laurence D. Fink is Founder, Chairman and Chief Executive Officer of BlackRock, Inc. He and seven partners founded BlackRock in 1988, and under his leadership, the firm has grown into a global leader in investment and technology solutions to help investors build better financial futures. Today, BlackRock is trusted to manage more money than any other investment firm in the world. Mr. Fink has been named one of the "World's Greatest Leaders" by Fortune, and Barron's has named him one of the "World's Best CEOs" for 13 consecutive years.

Prior to founding BlackRock in 1988, Mr. Fink was a member of the Management Committee and a Managing Director of The First Boston Corporation.

He serves as a member of the Board of Trustees of New York University (NYU) and the World Economic Forum, and is Co-Chairman of the NYU Langone Medical Center Board of Trustees. In addition, he serves on the boards of the Museum of Modern Art, and the Council on Foreign Relations. He also serves on the Advisory Board of the Tsinghua University School of Economics and Management in Beijing and on the Executive Committee of the Partnership for New York City.

Mr. Fink earned an MBA with a concentration in real estate from the University of California at Los Angeles (UCLA) in 1976 and a BA in political science from UCLA in 1974. 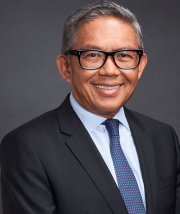 Bahren Shaari was appointed Chief Executive Officer of Bank of Singapore on 1 February 2015. He was previously the Senior Managing Director and Global Market Head of South East Asia. He has more than 30 years of banking experience and is an executive committee member of Singapore’s Private Banking Industry Group which shapes the private banking competency standards of the wealth management sector.

In 2016, he was conferred the Singapore Institute of Banking and Finance Distinguished Fellow award, in recognition of his significant contribution to the financial industry and outstanding leadership capabilities. Prior to joining Bank of Singapore, Bahren served as the Managing Director at UBS Wealth Management, responsible for the South East Asian and Australian Markets. Bahren is an alternate member of the Council of Presidential Advisers. He has been a non-executive and independent director of Singapore Press Holdings since April 2012.